Our Takeaways From DBJ’s “Hunt Gets Harder…”

The Denver Business Journal recently published the article Hunt gets harder for restaurant help in metro Denver, describing the “borderline crisis” state of staffing shortages in Denver restaurants. As the “bright-white age of Denver restaurant expansion” continues with no end in sight, restaurant employers are having difficulty retaining and recruiting staff.

The reason, as Adam Schlegel, part-owner of Snooze and executive director of EatDenver, puts it, “there are far more restaurant jobs than people who can fill them.” And, this “crisis” is not just a local phenomenon. Similar accounts of hiring strife in Chicago, Boston, and Houston, to name a few, have hit the airways in recent months.

While restaurant owners are feeling the pressure, this increasingly high demand for staff has opened the treasure chest for the people working in the restaurant industry “who suddenly seem to hold the power.” It’s good to be a restaurant employee, and it’s getting even better.

In 2014 alone, the restaurant industry added more than 400,000 jobs nationally, making it the fastest growing industry in terms of workforce and there are no signs of slowing. More than 150,00 restaurant jobs have been created so far this year, keeping the industry on track to add the projected 300,000 jobs in 2015.

In Colorado, restaurant jobs have grown twice as fast any other industry in the state thanks to Denver’s restaurant boom. To give you an idea of just how big the boom is, restaurant consultant Jon Imbergamo estimates that for every Denver restaurant that closes, 4-6 new ones open.

Needless to say, there are positions available all over town. In fact, Schlegal estimates that a job seeker with service industry experience can get “five to 10 immediate expressions of interest after posting their resume.” The opportunities aren’t just limited to seasoned restaurant workers either as staffing shortages include host/hostess and other entry level positions. Given the hiring hardships, restaurants are growing ever-more competitive when it comes to maintaining staff, which means growing incentives to keep people around. According to the DBJ’s Hunt Gets Harder article, employee wages, including starting pay, have increased by 15-20% over the last 18 months, with some restaurants going up by 40%.

But that’s not enough. As the choices of where to work grow, employees are becoming extremely selective to the point that they are looking for additional things besides a higher paycheck. Restaurants across the state, and nationwide, are offering new or increased benefits. From 401k plans to paid gym memberships to “kick-ass staff parties”, owners and operators are doing basically anything and everything to keep staff at their establishment. 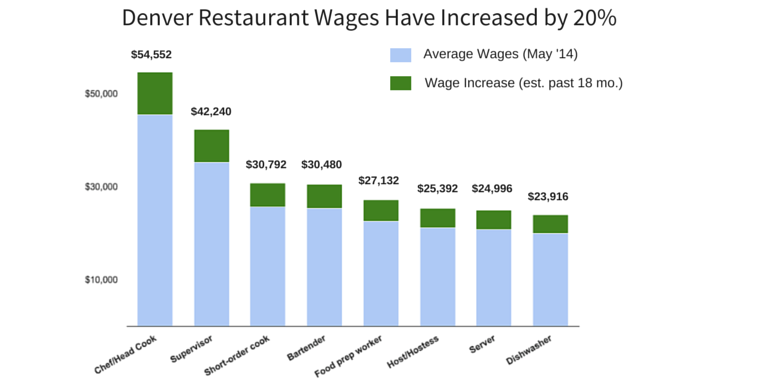 Some restaurateurs are going out-of-the-box (literally) to solve their staffing woes by going outside of the heart of the city. Both Snooze and Steuban’s have ventured outside of Downtown Denver and opened locations in the surrounding suburbs. Not only does this enable restaurant owners and operators to tap into a new talent pool, but it also provides new job opportunities to the people who live in the area. No longer does working at a top restaurant mean commuting to and from the Denver metro area. Especially now that traffic is getting worse by the day.

The restaurant industry is growing. So much so that the workforce as it is now cannot accommodate. That means that there are jobs available for the taking plus more money and benefits to those who seize the opportunity. Like I said before, whether you’re a veteran or just getting started, it’s good to be a restaurant employee.